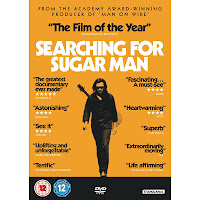 "If something is too good to be true... then it usually is."

That's what I usually say. Not to set myself up for disappointment, but to make sure I am not fooled (too often).

The feeling crept up on me when I watched "Searching For Sugar Man", but I played along. It was a good story. A true fairytale. But now it turns out, apparently it was too good. Once again proving that, yes, fairytales are not true.

In today's newspaper I read that the film's protagonist played several big stadium concerts in Australia and New Zealand in 1979-1981 and that his album sales there reached platinum five times over. A fact not mentioned once in the movie. In fact it played up the "fact" that his albums flopped and that he lived in totally obscurity. I was wondering why Sixto didn't say much in the film. He probably told more of the real story.

Of course documentaries take liberties when telling their stories to make them more to the point. But this undermines the whole premise of the film. The sad thing it, that the story about Sixto's impact on the anti-apartheid music scene in South Africa, was good enough in itself, had it just focused on that. The fact that he had success elsewhere would not have weakened the film's angle that much.

But director Malik Bendjelloul couldn't resist the temptation of creating a fairytale. Sadly he has now put himself in a position where his word and work will leave us wondering: Is he telling the truth this time?

Yes, some people argue that the lines between fact and fiction are blurred in documentaries these days. But if fiction takes over or if  the editing is too selective by omitting parts that are essential to maintain truthfulness... then it's not a documentary anymore. Unlike way back when Sixto made his music, you can't keep facts like these a secret in the hyper-connected world of 2013. So why even try?

So, in my humble opinion the film does not deserve the four stars I gave it - or even the Academy Award it received. And the sad thing is, there was no need to keep these things from the audience in order to make a good movie. A "little white lie".... is still a lie.